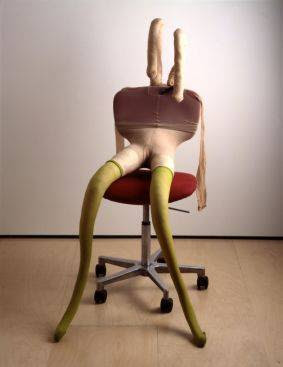 Opening hours: Tuesday to Sunday 10am to 6pm

The exhibition Thyssen-Bornemisza Art Contemporary. Collection as Aleph connects the structural (and symbolic) endlessness of the architecture of the Kunsthaus Graz with an attempt to navigate (mentally) the temporal and spatial levels of the Thyssen-Bornemisza Art Contemporary Collection. A comparative reading of the literary oeuvre of the Argentinian writer Jorge Luis Borges forms the point of departure for this investigation. Borges's oeuvre and its conceptual as well as narrative landscape is used as a methodology to build up a sequence of potential narratives (and fictions), continued (as if) en abíme in a collective archive of visual imaginary. Aleph – the cosmic point that contains all times and places in the universe, a fabled observatory that figures the endlessness of all things – frames the sequences of potential structures and possible fictions: from the issues concerned with the principles of identity and meanders of authorship through paradoxes of language and space-time confluences down to conjunctions of universe and utopia, reality and fiction, mirror and encyclopaedia. The exhibition emphasizes the processual reading of the act of collecting as practice(s), in which combinations and permutations of arrangements create ever new meanings, contexts and relationships between artworks.

The exhibition architecture, developed by the Vienna-based office The nextENTERprise spatializes the exhibition gallery as an inversed horizon, reinforcing both endlessness and simultaneity by means of displacement and fractal vision and activating the powers of memory and imagination, embedded at the very core of the Aleph.