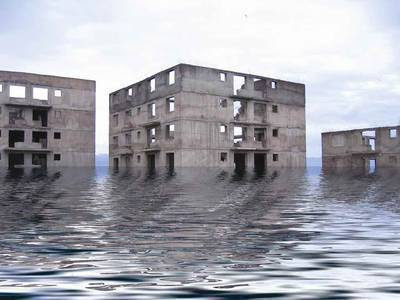 The exhibition „Zero Gravity' observes society in the light of architectural social spaces. We live in a situation in which there is hardly any social, moral, and political base and where group-identity experiences are absent. The fragmentation of common knowledge and perception because of the transfer of former public or centralised media and places leads to a maceration of grounding and a missing common idea about how we want to life together. Therefore, in architecture as well as in art, many artists try to go beyond a stable gravity and question the idea altogether.

The development of our urban infrastructure is based on popular consensus as well as on the idea of branding. The majority of city branding projects are based on civic processes that are built upon public participation and popular consensus. Representation and reality often become a blur. But cities are more than a product one buys or destinations to which one transfers, they have been throughout history places that nurture ideas and enterprises over the time. Cities are a place of social intercourse and get together. A city and its facades show a lot about the condition of society. Especially in the 20th century, European cities faced among others Modernism, Fascism, Wars, Stalinism, Socialism, Cold War, and Capitalism. In a steady rhythm of demolition, planning and new developments, most of the cities developed into a conglomerate of inconsistent ideological elements.

Since this project is a co-operation between a Bulgarian and a German curator, our starting point are two historical positions: The architectural ideas of Cedric Price and the early Socialist planning of Dimitrovgrad, a city planned by a collective in Bulgaria in 1947. As the antithesis of the inflexible institution, Price developed the Fun Palace project from 1961, a proposal for a building whose lifespan would be limited to no more than twenty years. Price argues against the production of permanent, specific spaces for particular functions, stressing instead the need for flexibility and the unpredictability of future use. Price redefined the role of the architect as an agent of change, whose main responsibility was to anticipate that, and offer new possibilities for society as a whole.

The architectural projects in Dimitrovgrad, based on the great communistic infrastructural plans, present a different conception of social and public space as well as the infrastructural ideas of the 20th century. With an approach largely differing to Price's, a brand new city was constructed during the first years of the totalitarian regime. The appearance of the city strongly underlines the utopian communistic conceptions, constituting the main ideas of the stability and eternity of the totalitarian system. Dimitrovgrad serves as an example of a social space, developed from scratch, personifying the main conceptions of the time beyond the iron wall.

We take these concepts as a point of origin for thinking and reflecting today's architecture and urbanism and its social and political context. Our focus will be on public spaces and public architecture since the built structure around us structures our whole life. Cultural change, determination of identity and the new positioning of a country and of a generation are visible in 'built space'. Urban transformations followed step by step the social and cultural change and emphasized a city's characteristic identity.

The exhibition brings together a scenario that starts with former utopian thinking, that reflects today's situation and that adventures the tomorrow. Above all it was artists, photographers or video-makers who immediately became conscious of changes and modifications, focussing their works on these developments. Therefore, we try to connect these movements to get an in-depth view of current social thinking. Cedric Price was very aware of the notion of gravity. He concluded that we don't have problems, only opportunities. The idea that a problem can become an opportunity, a problem as the driving force behind developing something new is appealing. Gravity is a physical psycho-social relationship. And this contains exactly the question behind the whole project: What does public space in the 21st century mean? What kind of new communications spaces does our society need?